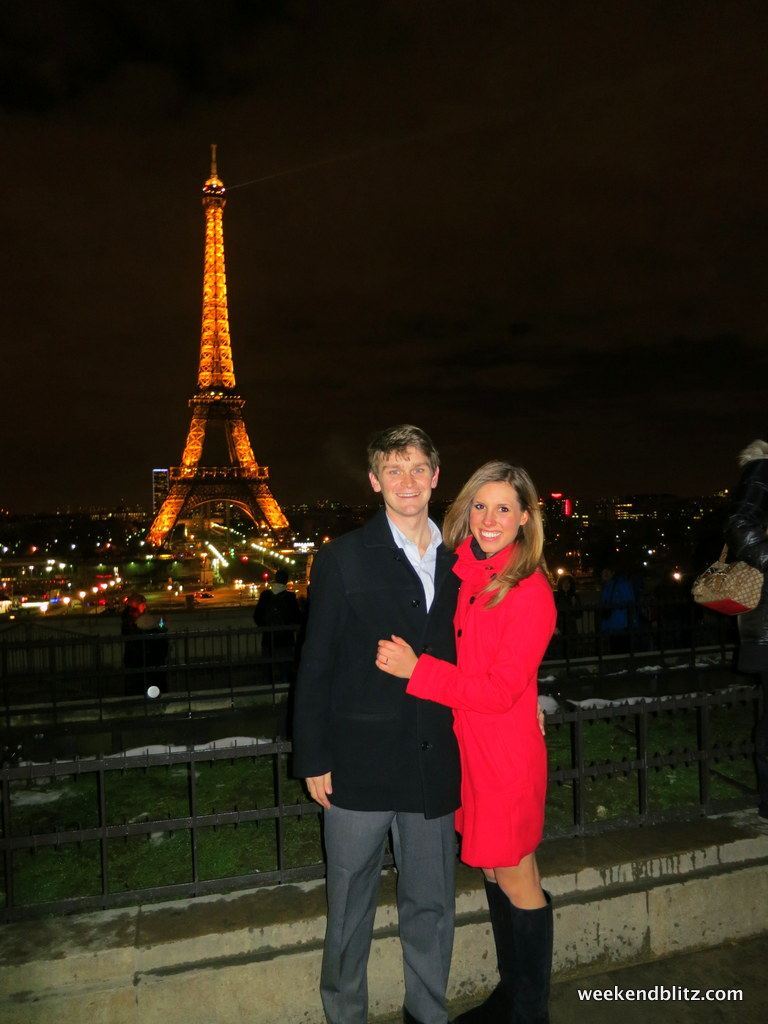 While on our recent whirlwind trip to France and Italy to visit Jeff’s sister who is studying abroad in Nantes, France  (more to come on that soon), we spent a few nights in Paris. The city of Paris is special to us because it’s the first place we ever traveled together (while we were studying abroad in Europe -Jeff in France, me in Italy- in Spring 2009). Who knew our weekend trip to Paris back in 2009 (long before we even started dating!) would turn out to be the foundation of our engagement?! It was snowing hard on Tuesday when we arrived, but we still managed to explore, spending the first night in the hostel (St. Christopher’s) where we stayed on our first trip to Paris together. Seems romantic, until we quickly realized the hostel was not all that we remembered:  on our return, we realized how smelly and gross it was! And how old we felt…

We even ate dinner that night at the cute little cafe we’d discovered back in 2009. Chalk that up to a day full of nostalgia: score one for a romantic engagement! And the cute little restaurant we discovered in 2009 (my Toms were the only shoes that weren’t soaking wet from all that snow!)

The next day, we started our adventure with the Musee D’Orsay, my favorite museum, where we spent more than an hour (more time that we ever spend in art museums!) looking at Monets and Van Goghs. From there, Jeffrey wanted to go look at some canal in the 19th arrondissement. It was pretty, but would have been much prettier without all the slushy snow. Little did I know, Jeff was staking out a good place to propose! Inside the Musee D’Orsay The Canal… probably prettier in the spring

After a lunch of hot soup and escargot, we headed back to the main area of town and ducked into Notre Dame with some vin chaud – the best thing we’d found in the cold weather – you know it’s cold out there when you go into a cathedral to get warm! Those Europeans hate heating their churches! Our delicious escargot at lunch

I insisted on walking back along the Seine River because I knew all the artists would be selling their wares along the street there. To my surprise, only a few booths were open because it was unseasonably cold and all of the snow from the day before was still on the ground. I guess it’s not the ideal time to have an outdoor job.  But I still managed to pick up a few posters…

Soon, Jeff suggested that we walk closer to the river:  instead of walking on the sidewalk by the street, we walked down a ramp so we were walking right next to the water – all alone!

Then, Jeff asked me when I wanted my surprise of the day!

So, a little about my surprises: We celebrated our 3 year anniversary a few weeks before and, instead of celebrating long and hard then, we had decided to wait until Europe to eat at fun restaurants, etc. Jeff had promised lots of surprises on our trip, and he was really delivering! Starting with an upgrade to first class for our plane ride over… I had no clue what to expect next! The best part? Every surprise came with homemade booklets explaining all about the surprise! Seven total surprises on our trip!

So, for my next surprise, Jeff suggested we sit down… on a graffiti and snow-covered bench. As we sat (on top of grocery bags to avoid sitting in melting snow), he handed me my third booklet of the trip, which showed pictures of us through the years. It ended with a list of things he loved about me, which he read out loud himself. And…followed it up with a Will You Marry Me?

And then, I made him get down on one knee, despite the frosty and snowy ground! Hey, this sort of thing only happens once… Here’s where we really got engaged – right by the Seine River! And then we headed to outside the Louvre (just a block away) to take a picture with some real Parisian surroundings!

After celebrating a little with some free champagne, we headed off to our fancy dinner on top of the Eiffel Tower! Yeah, I know, you’re probably thinking what I was:  this is too good to be true?! Jeff had made reservations months ago for that very night! So, he noted how happy he was that it wasn’t snowing that day! When we arrived for our 7pm reservation, though, guess what! Our champagne waiting on us when we got back from just GETTING ENGAGED! Ready for our dinner at the top!

They informed us that the Eiffel Tower had been closed that day because of the weather, and so the restaurant at the top was closed, too.

So, we celebrated perfectly by roaming the streets of Paris at night and popping into a cafe for foie gras and cheese, followed by dessert at another fancy cafe. I’m so glad I packed my sparkly dress! It was the best proposal… better than one I could ever even dream of! And I just can’t wait to marry him!!