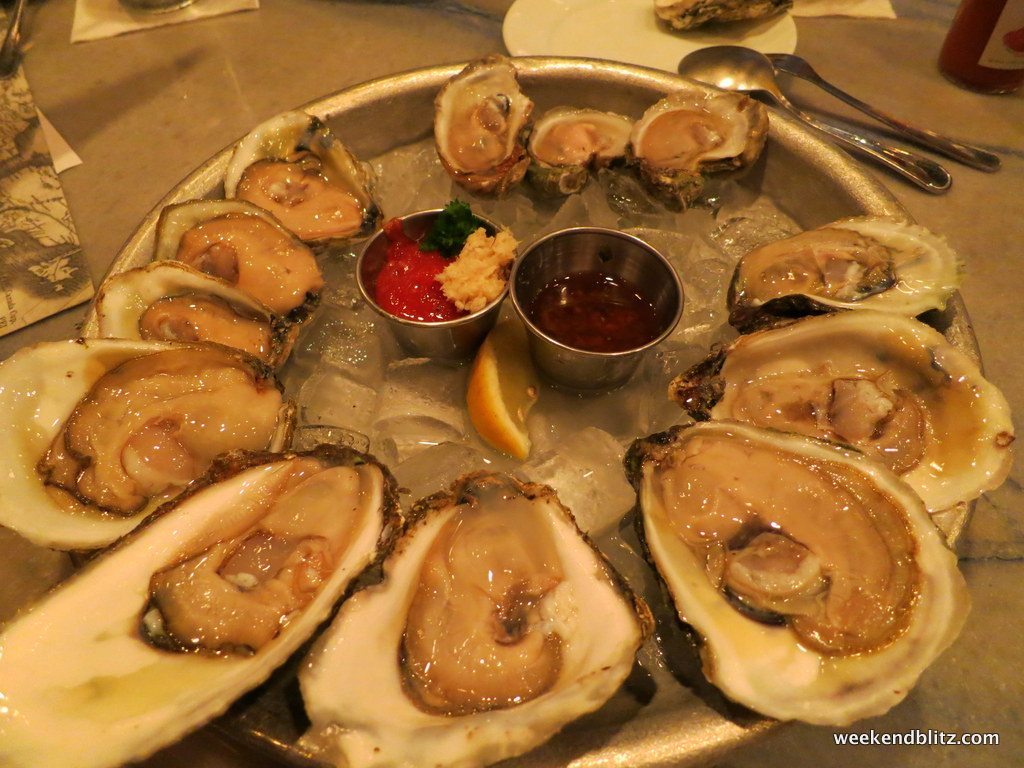 Pearlz has a great rating on Urban Spoon, probably from all the tourists. But, even if you're a local Charlestonian, give it a try. It's a bit of a change from the likes of Amen Street and Hanks, but you'll encounter a fun and young crowd that's down for a good time along with pretty tasty seafood and oysters.

Pearlz, on East Bay St., has never really been in the pool when choosing restaurants before – I don’t know if it’s because it’s a “chain” (it’s also in Columbia, SC) or that it seems so touristy, but either way, I’ve always been intrigued, just never enough to act on it.

That all changed the other night – Jeffrey and I were feeling oysters, and we decided to give Pearlz a try. We walked in to a crowded restaurant and grabbed two seats at the bar. It turned out to be the best place to sit – you can see the guys preparing the oysters right in front of you, and they’ll tell you about each of the oysters. They even gave us some free samples! We started by splitting the SAFFRON LOBSTER BISQUE ($6.95) with lobster beignet.  It was a great choice. Salty, but great lobster flavor. I was looking for a few chunks of meat, but it was only broth. Very rich. Then, after the free samples, we decided on the DOZEN OYSTER SAMPLER ($18.95). These samplers change every night, based on where the fresh oysters are coming from, but, when we were there, we tried the Gulf (Texas); Cape Shore, New Jersey; Blue Points, Connecticut and Washburn, Massachusetts. Next, we split the small plate special of GRILLED MAHI MAHI WITH GREEN CURRY LOBSTER BROTH ($11.95), with mango pineapple salsa and cilantro aruglula salad. Holy Moly. This was delicious. Plenty of food to share, especially when splitting the soup and oysters. It has the perfect amount of spice —  a little kick but definitely not too strong for those that just like a little bit of oomph. The green curry flavor paired with the tropical mango really makes you feel like you’re eating seafood in Costa Rica, not Charleston. Throw in an oyster shooter (or two) made from Pearlz’ very own black pepper vodka (available to purchase), and we had a very satisfying meal. Pearlz’ oyster shooters are very spicy and drowning in about 3 oz. of cocktail sauce, just the way I like them. BOTTOM LINE:  Pearlz has a great rating on Urban Spoon, probably from all the tourists. But, even if you’re a local Charlestonian, give it a try. It’s a bit of a change from the likes of Amen Street and Hanks, but you’ll encounter a fun and young crowd that’s down for a good time along with pretty tasty seafood and oysters. WKND PICK: A Look Back at New York
Next