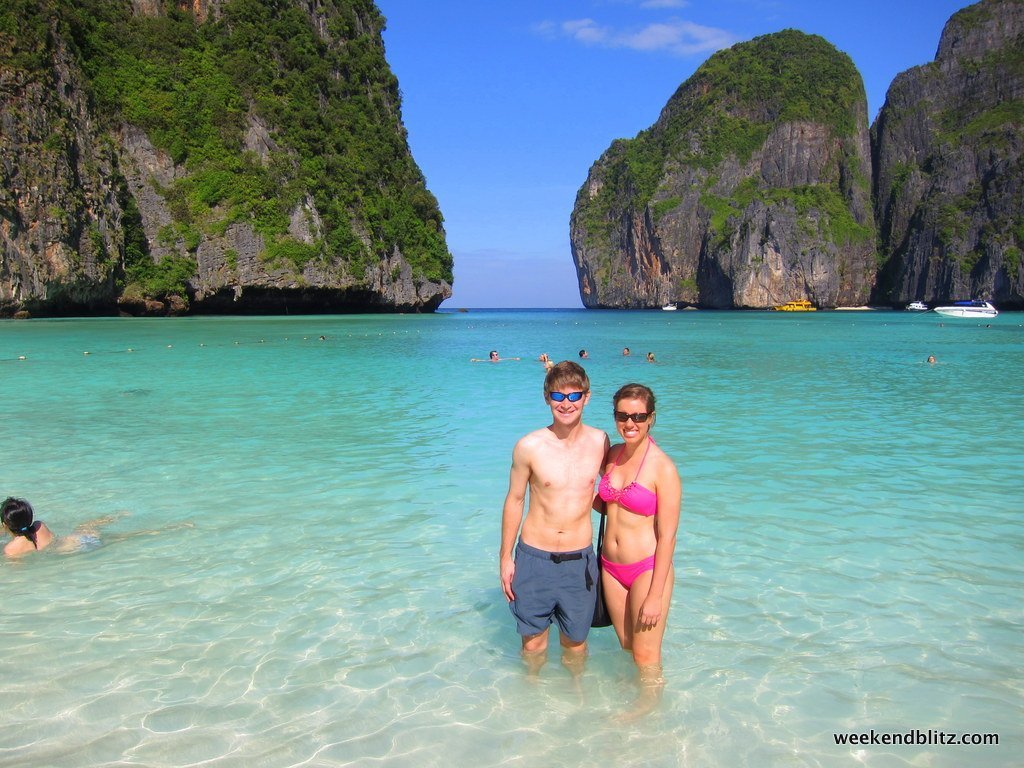 Ok, so I picked an easy one for our 1st installment: Thailand. Thailand can be an awesome honeymoon pick for a few reasons:

How to Get There

From the East Coast, this will ding you for around $1,300 to $1,700 in economy, but who wants to fly economy–especially if you’re on a honeymoon?! Departing from the West Coast should shave a few hundred off those figures.

If you have at least 80k Delta Skymiles (or American Express Membership Rewards points), you can book a roundtrip ticket from North American to Thailand in economy. Booking in business will cost you 120k Skymiles and is absolutely worth the upgrade in my opinion – but, when taking into consideration you’re booking for two people, 160k Skymiles might already be a stretch so 240k for Business might be simply out of reach.

Benefits of using Delta Skymiles to consider when researching:

Booking a Delta award ticket allows you to have 1 stopover and 1 open jaw for free! This could dramatically increase the price of an out-of-pocket-cash-paid ticket, so you should absolutely plan to take advantage of it. This means your final itinerary could look something like:

Day 1: Fly New York-JFK to Shanghai-PVG on China Eastern
Day 2-4: Stopover in Shanghai
Day 5: Fly Shanghai-PVG to Bangkok-BKK on China Eastern
Day 5-7: Explore Bangkok
Day 7: Transit to Phuket on your own terms: pay for a flight, take the train, rent a car etc…
Day 7-9: Explore Phuket and nice resorts
Day 10: Fly Phuket-HKT to Kuala Lumpur-KUL and then Kuala Lumpur-KUL to Los Angeles-LAX on Malaysia Airlines and then connect to a Delta flight onward back to New York-JFK. This example itinerary makes use of the stopover (in Shanghai) and then the open jaw (flying into Bangkok and then out of Phuket). This is how you can really maximize your Skymiles when award booking.

Getting to Thailand is a P.I.T.A. from the East Coast on Delta aircraft… I mean, the most efficient route that Delta offers is Atlanta (ATL)/New York (JFK) –> Tokyo (NRT) (both about 14-15 hour flights) and then Tokyo (NRT) -> Bangkok (BKK), a 7.5 hour flight.

Cities to Tokyo-NRT on Delta: As with any Delta flight, you’ll want to methodically search the most constrained segments first – this is typically the longest flight of your trip. In this case, I would suggest searching how to get from any Delta city in the US to Tokyo-NRT and then worry about how you’ll get to the hub later. You really want to know the availability of the weakest link in these scenarios. I hone in on departing on Sunday August 6th and returning on Monday August 14th. The trip will require 70k SkyMiles in coach per person.

Now that you have the most constrained, longest leg selected as available, it’s time to search for the Tokyo-Bangkok route: Korean Air will give you a plethora of choices to get from the US to Seoul-ICN and then you can easily connect to Bangkok-BKK.

Cities to Seoul-ICN on Korea Air Again, it’s all about the methodical search. I was able to piece this itinerary together on Delta.com for 120k miles in Business Class:

The final step would be finding low-level Delta award space to position myself from Anywhere, USA to San Francisco-SFO (or the Korean Air city you found departing the US).

China Southern’s only flight to the US is its Los Angeles-LAX to Guangzhou-CAN route. Here’s some example availability of the route:

Ignore the First Class availability, you won’t be sitting up in the very front with Delta Skymiles…

From there, you can easily find availability on the Guangzhou-CAN to Bangkok-BKK route with 5 scheduled flights daily.

The coolest thing about flying China Southern from LAX to CAN? It’ll be on its new Airbus A380: Business Class on the A380 (source) Business Class on the A380 (source)

Unfortuately, you can’t book China Southern flights on Delta.com. To find award space, your best best is using the tool at Wandering Aramean Travel Tool – on this site, you should find segments with award seats available and call Delta to book. Adam from Pointmetotheplane.com offers a excellent tip here:

Important – several of the Delta agents saw no availability when searching for business class awards on LAX-CAN, I had to instruct them to manually request the space from China Southern, make sure they do this. If they don’t know how or refuse to, hang up and call back for another agent.  You can add your domestic positioning flights once you confirm the China Southern flights.  Low level business should price at 120,000 SkyMiles while low level economy is 80,000 SkyMiles.

China Airlines serves the following cities from their main hub in Taipei-TPE:

Finding award availability on China Airlines is tougher than most and its not bookable on Delta.com. To find award seats you’ll have to signup for an account at Expert Flyer and start searching dates. I found 7+ seats available in economy on most flights but very little availability in business.

Looks like I hit a gold mine on this one, flight CI 2007 operates only on Sundays and has 7+ seats in economy & 7+ seats in business! Jump on this is you need it Once you’ve found flights with availability, you’ll need to call Delta to book and expect to pay a $25 phone booking fee. Make sure to have very detailed info on the flights you want i.e. dates, cities and flight numbers so you can spell out exactly what you want. And, similar to the China Southern issues outlined above, you might have to ask the Delta rep to manually request space from China Airlines.

China Eastern serves the following cities from their main hub in Shanghai-PVG, pretty much identical to China Airlines’ routes above: To find award availability, you’ll need to use ExpertFlyer (a paid service), I found 4+ seats in business and 9+ seats in economy available on this San Francisco-SFO to Shanghai-PVG route in September 2013:

Or Wandering Aramean Travel Tool award availability tool (a free service), which is again showing plenty of availability on the New York-JFK to Shanghai-PVG route:

Once you’ve found your legs, call Delta to book.

***DISCLAIMER***: As of Feb 1, 2013 Malaysia Airlines officially joined the Oneworld Alliance (American Airlines, British Airways, Cathay Pacific etc…) and it’s uncertain how much longer the Delta/Skyteam agreements will be in effect.

The only route from mainland US is the Los Angeles-LAX to Kuala Lumpur-KUL route: But the good news is that it offers a Kuala Lumpur-KUL to Bangkok-BKK and to Phuket-HKT: You’ll need to use ExpertFlyer to find award availability, but the service can only search on economy class availability:

To find business class availability, you should create an account with Malaysia Airlines’ Enrich program (for free): With you flights selected, you’ll want to try and call Delta to book with Skymiles. Again, there’s no telling when they’ll stop letting you book flights on Malaysia Airlines, so don’t necessarily count on this choice working.

McCown’s Weekend Pick: For the Travelin’ Toes
Next