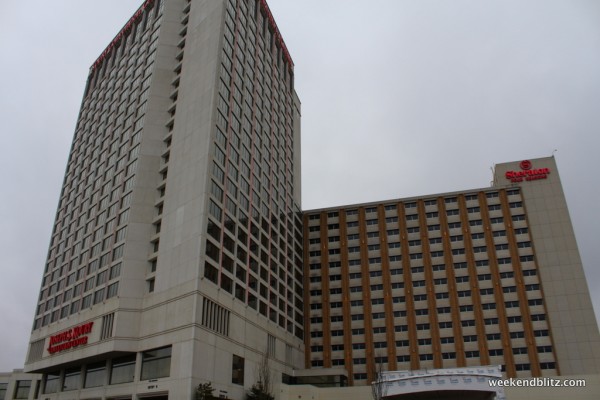 Ready to dive into some grub, I was dramatically torn between walking about 200 yards across the street to Bone Fish Grill (which I can say from experience that it is delicious) or give the main hotel restaurant a chance. Given that it was cold and rainy and I was feeling particularly lazy, I settled on Joseph’s Restaurant.

I wandered into the huge restaurant which had a decent amount of ambiance. Despite being close to empty, there was nothing awkward about this one. The theme is very generic New Orleans / Anytown, Europe with its broad iron decorations and low, bistro-style lighting. The windows of the restaurant open up to a long corridor of the hotel, further emphasizing my theories about their Vegas-style attempt.

Looking over the menu, there were all the very typical cater-to-everyone hotel restaurant choices. Burgers and sandwiches all day for $11-ish. Tuna, salmon, trout, crab cakes, chicken, pork chops, omelet, squid/calamari, shrimp, pastrami, catfish, corned beef, skirt steak, filet mignon… you name the protein and they’ll cook it up for you.

They had a good beer selection for around $4.75 each.  All the usual suspects plus a few less common but delicious imports (Hoegaarden, Pilsner Urquell) and a few crafts. I spotted the Great Lakes Brewing Co.’s Edmund Fitzgerald porter (a craft beer with a 96% on beer advocate ?! Well done, Sheraton) and thought it was great. I ordered the SEARED NORTH CAROLINA MOUNTAIN TROUT ($21.50) served over smoked bacon and shrimp risotto, haricot verts and a Dijon hollandaise. At first, the trout tasted fresh enough and the skin-on preparation put me a bit more at ease.  But after a few bites, I realized how dry the trout actually was. The Dijon hollandaise was mild and mainly just a decent buttery sauce. The super cheesy risotto was delicious with a great bacon flavor and a hefty portion of salt. The green beans were, again, very well salted (not salted well, mind you) and coated in enough butter that they couldn’t possibly have tasted bad. I genuinely started off liking all of the food, but then realized that, when you overcook the proteins and overuse butter and salt, it’s not a sign of good food, it’s the sign of using crappy ingredients and not very skilled chefs.

BOTTOM LINE: Extremely average hotel food–they cook a lot but probably don’t do any of it well. If you have a choice, please do yourself a favor and make the 3 minute walk to Bone Fish Grill — prices are about the same but the quality is infinitely better.

Interestingly, with 1,000 rooms, the Sheraton Four Seasons has the most rooms under one roof of any other hotel between Atlanta and Washington, DC. The monstrous 250,000 sq. ft. of meeting space is rumored to rank at 3rd largest on the East Coast. So yeah, this place is huge. Price: $144/night. They don’t seem to play the AAA discount game here. I even tried Gov’t/Military rate and had no luck. I guess if you’re coming to a conference here, Sheraton knows they’ve got a captive audience and might as well juice ’em for as much as possible. Your next best bets are the Double Tree ($135) or Hampton Inn & Suites ($118) — both are a drive away so, if the Sheraton is your destination, you’re better off paying a just a little extra be near all the action.
Location: Right next to Four Seasons Mall in Greensboro, so there’s plenty to keep most people busy there. It’ll take about a 12 min/5 mile drive to get to downtown Greensboro, so it’s not very close if that’s your destination.
Amenities: Big plus: Free parking and free internet. This makes the SPG Gold/Platinum amenity choice an easy one–go for the 250 extra Starpoints. There’s also a large indoor/outdoor pool. Room: My room was quite spacious. It absolutely has signs of being dated, but they’ve just announced a $30 million renovation that was underway during my visit. Very convenient: a second sink outside of the main bathroom

Lobby/common areas: This hotel is massive. When you enter, there is a giant lobby area complete with customer service desks, restaurants, a cafe and even a fountain of water. Compared to any other Sheraton hotels, it’s so “grandiose” that it almost feels like a Las Vegas hotel. You’ll nearly get lost weaving around the brightly carpeted hallways. BOTTOM LINE: For $144/night the service was fine, the rooms big but dated (with renovations on their way) and plenty of on-site drinking/dining choices. 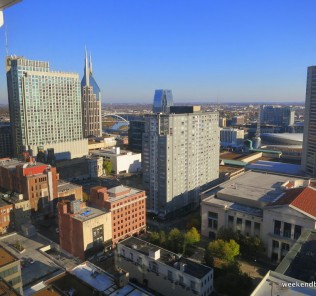 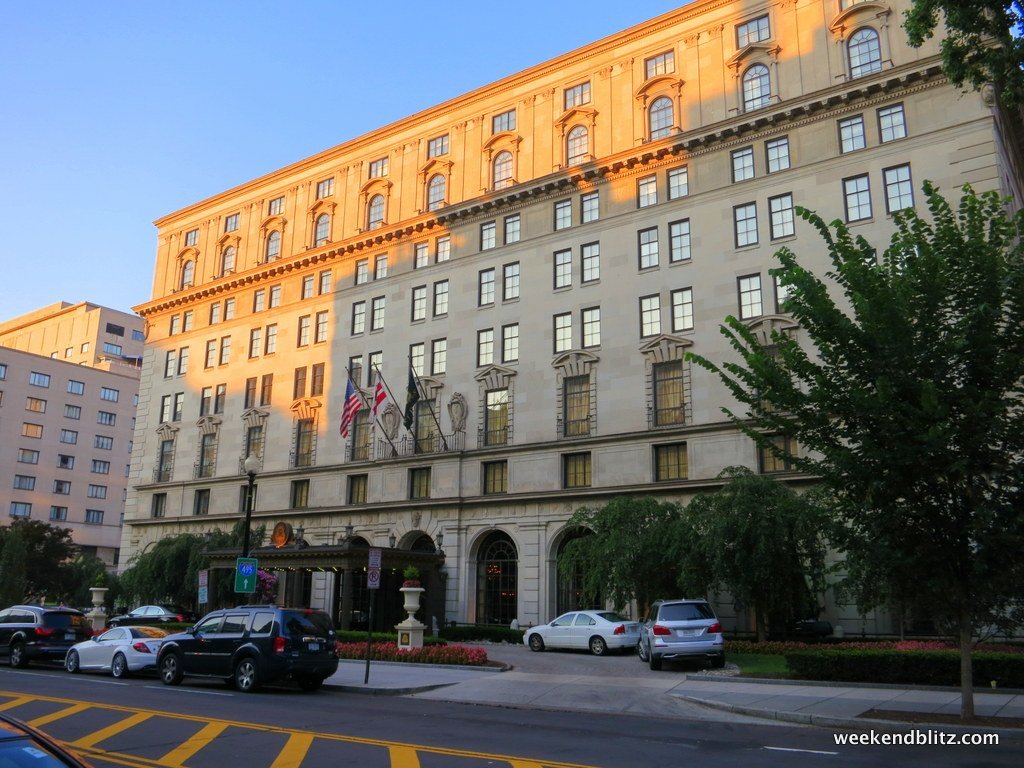 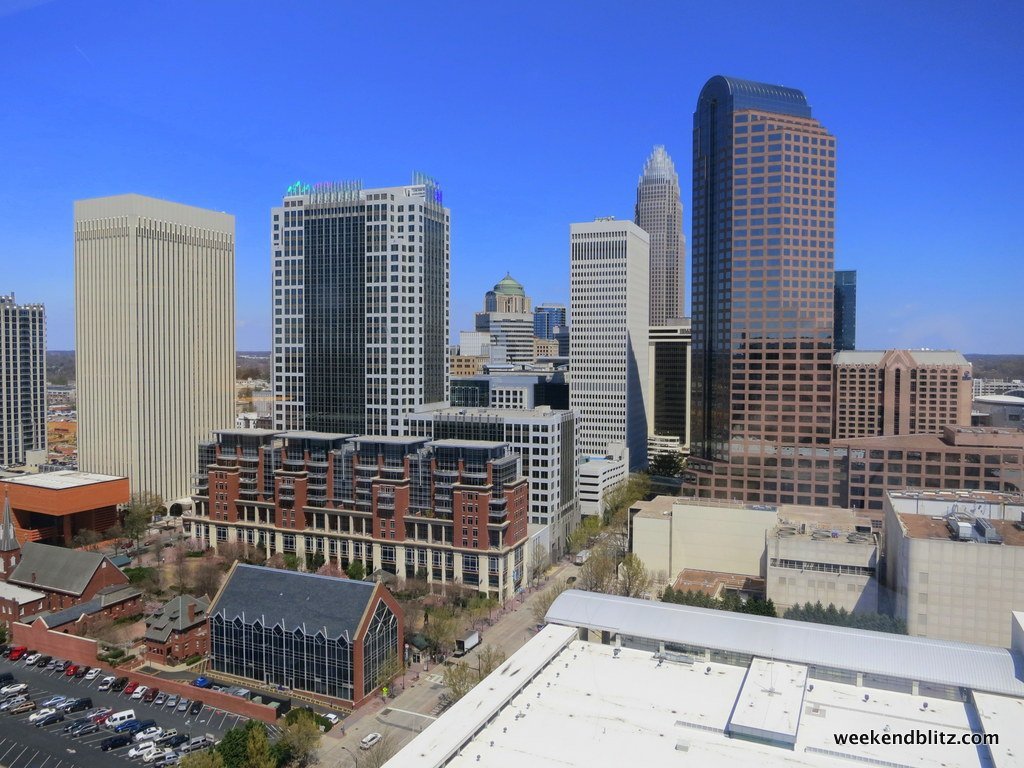 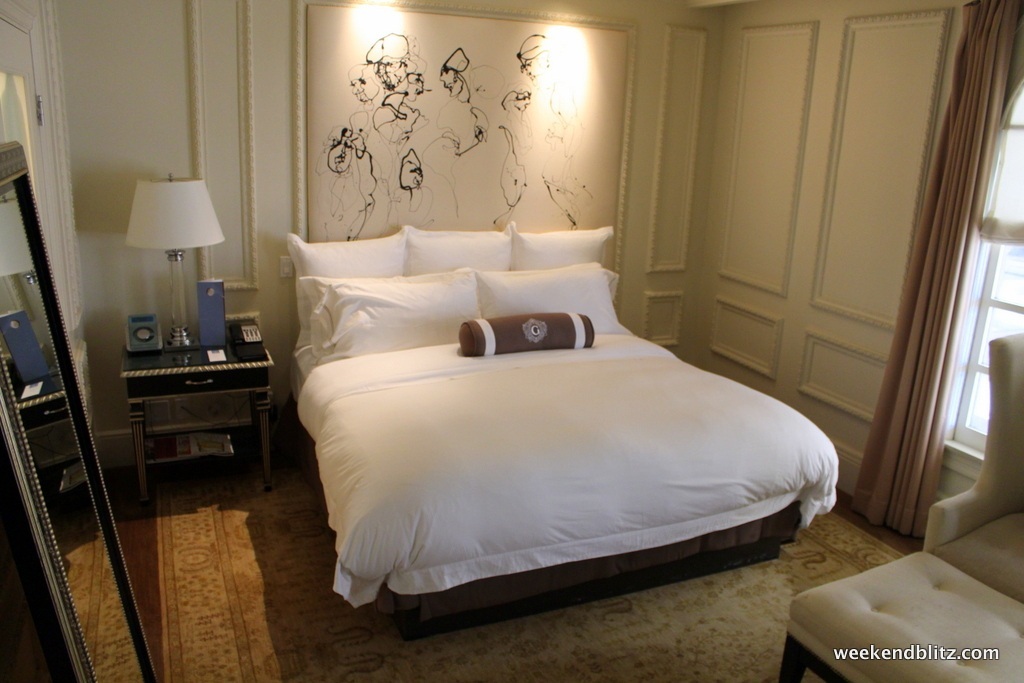 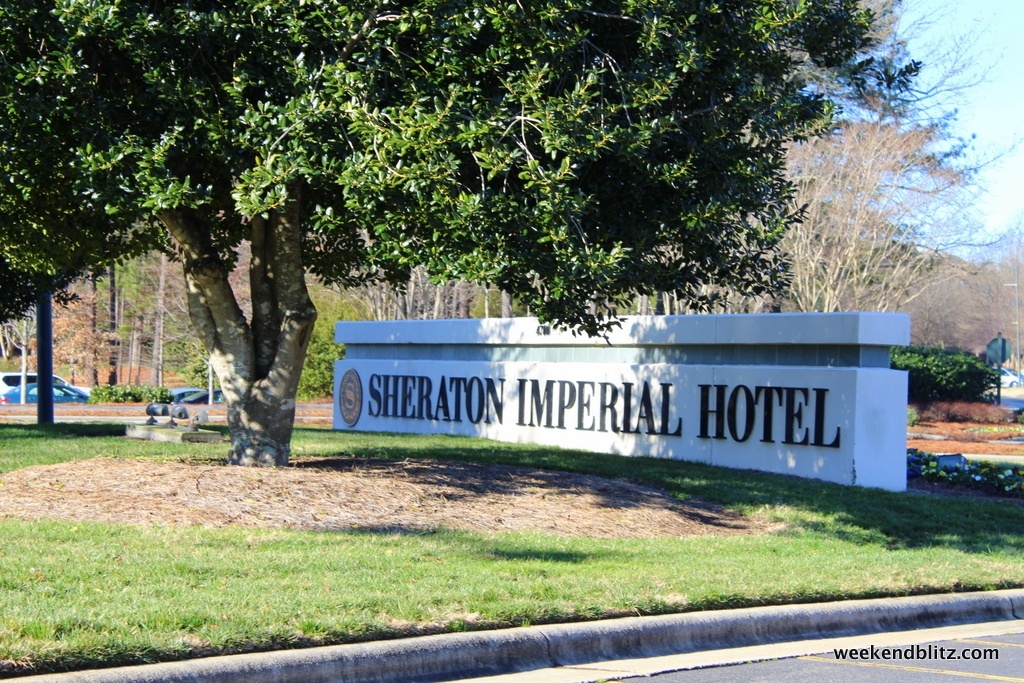