What are “Fifth Freedom” Airline Flights and Routes?

Why Do I Care About Fifth Freedom Routes?

Simply put, fifth freedom routes are cool. They’re unique and unusual. It’s the whole idea of how small and interconnected the world is that I find the coolest.

Real quick, the fifth freedom right of the sky is what enables United and Delta Airlines to fly many routes from Tokyo-NRT to a whole host of Asian cities. It allows Emirates Airlines, a Dubai-based carrier, to fly revenue passengers between New York-JFK and Milan, Italy-MXP, two foreign countries.

There are other examples (many of which will come in a later post), but here are a few:  Delta flies direct from Amsterdam-AMS to Mumbai-BOM and Air China flies from Madrid-MAD to São Paulo-GRU.

What are “Fifth Freedom” Routes?

There is a whole set of internationally adopted commercial aviation rights, referred to as the “freedoms of the air.” These rights set out scenarios in which commercial planes would operate routes for revenue. The first two rights, the first freedom and second freedom, are the most standard and over 129 countries have adopted the treaty that allow them. From there, the freedoms of the air get progressively rarer as they require approval from multiple states. This goes all the way down to the 8th Freedom, also know as cabotage, which as an example would allow a foreign carrier to fly a domestic routes. For example, if the US granted Air France the right to fly revenue passengers between New York and Los Angeles.

This is worth a quick synopsis (chart source: Wikipedia.org): 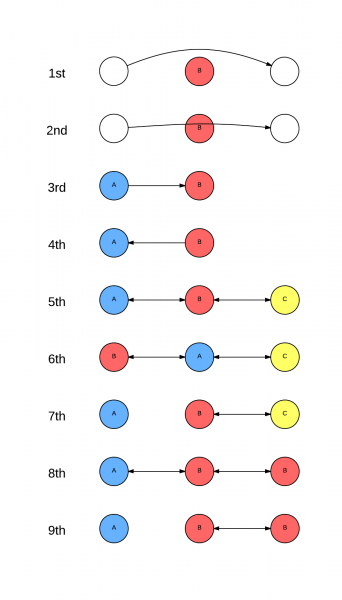 Excerpt from Introduction to Air Transport Economics: From Theory to Applications:

The ﬁrst freedom provides the right for an airline to ﬂy over another country without landing (ICAO, 2004). An example of a ﬁrst freedom right would be an international non-stop ﬂight from Los Angeles to London that over ﬂies Canada on the way to England. In order for this to occur, Canada must grant the US ﬁrst freedom rights. Today, with a few exceptions, almost all countries grant unilateral ﬁrst freedom rights. Moreover, countries may charge airlines for the permission to over ﬂy their country, essentially placing economic barriers on the ﬁrst freedom. For example, the over-ﬂight fee for the US is $38.44 per 100 nautical miles over the continental US (FAA, 2012). Russia is notorious for charging high over-ﬂight fees, especially on new polar ﬂights from North America to Asia. This provides an economic hindrance for airlines ﬂying such routes.

Fifth freedom rights enable an airline to carry revenue trafﬁc from their own country to another country, and then pick up and drop off traffic from the intermediate country to a third country. For these rights to be useable, the third country must also agree to the right. A prime example of ﬁfth freedom rights in action is Cathay Paciﬁc’s ﬂight from Hong Kong to Vancouver and then onto New York. On this ﬂight Cathay Paciﬁc is allowed to carry trafﬁc from Hong Kong to Vancouver and also from Vancouver to New York. In order for Cathay Paciﬁc to operate this ﬂight, Canada and the US must grant Hong Kong ﬁfth freedom for the route. Fifth freedom rights are rarely granted since the foreign airline is now competing with domestic airlines for the same trafﬁc. However, there are other examples of ﬁfth freedom rights such as Northwest’s inter-Asia operation from Tokyo Narita and EVA Ainuays operating the Taipei-Bangkok-London ﬂight with full trafﬁc rights from Bangkok to London. Fifth freedom rights are highly desirable to airlines, as segments can be tagged on to an existing ﬂight, and this increases its proﬁtability.

The sixth freedom of the air allows an airline to carry trafﬁc between two other countries by using its home base as a transit point. A prime example of this is an airline that ﬂies a passenger from Europe to North America and then transfers that passenger onto a ﬂight to Mexico or Central America. Usually sixth freedoms are not granted explicitly, but are given implicitly when third and fourth freedoms are granted. A slightly modified form of the sixth freedom, or “modiﬁed sixths" would allow an airline to transfer a passenger through its hub from two points in the same foreign country (Field, 2005). An example of a “modiﬁed sixths” would be a passenger ﬂying on a Canadian airline from Boston to Seattle that uses Toronto, Canada as its transfer point. Currently “modified sixths” are not allowed, but there is movement in North America to possibly allow this to happen (Field, 2005).

Finally, the eighth freedom is probably the most controversial freedom. Also referred to as cabotage, the eighth freedom allows a foreign airline to ﬂy between two domestic points in a country. For instance, cabotage rights would need to be granted if Qantas wanted to continue its Los Angeles ﬂight onto New York with local trafﬁc between Los Angeles and New York. Cabotage is controversial because it allows foreign competition on domestic routes. Few countries have granted cabotage rights, but they are actively sought during negotiations. True open skies between two countries would require cabotage rights from both countries. Europe's liberalization of air transport has allowed cabotage rights since the entire European Community is considered domestic from an air transportation perspective. 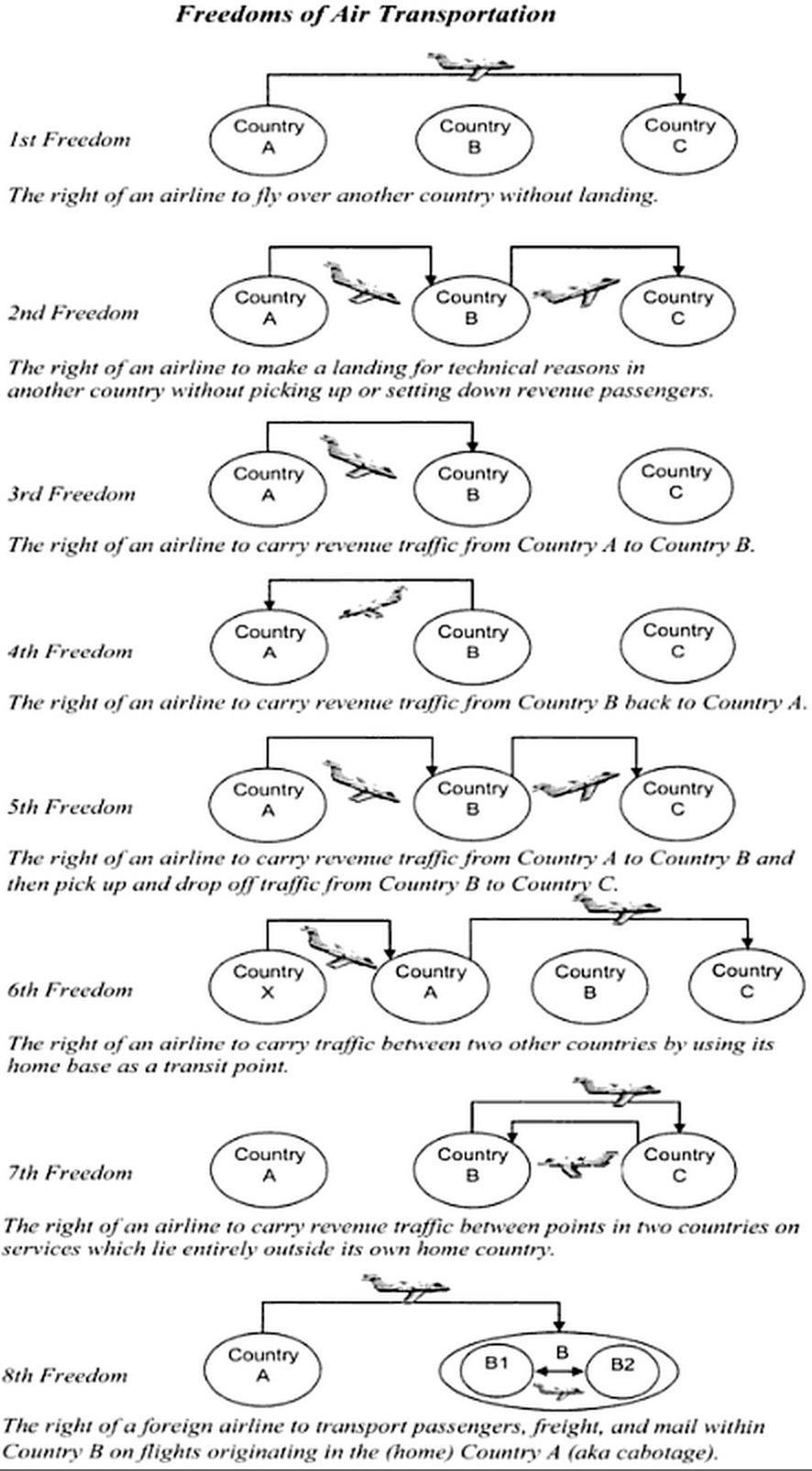 Why do “Fifth Freedom” Routes Exist?

It’s not all “smooth-flying” for Fifth Freedom routes: