The city of Santiago was much bigger than I expected, sprawling on and on as far as the eye could see. Admittedly, I had done little research about the city but was surprised at how clean it was, how friendly the people were and how tall some of the buildings were. Despite not seeing very many tourists at all (and no other Americans), there were many, many restaurants, very fancy hotels and plenty of stores to shop. We walked to the six-story mall (South America’s largest) and popped into the grocery store; it turned out to be a nicer and bigger version of Whole Foods… and just as expensive. Now we know where the top echelon of Santiago go to shop? 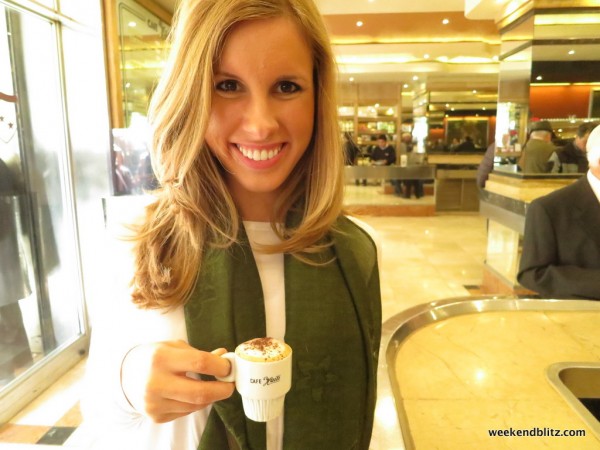 Always our first stop in any city…? Coffee!

Even though the main square of the town (Plaza de Armas) was closed while we were there, our favorite part of being in Santiago was just walking around the city streets and watching life happen. Like I said, there’s plenty of restaurants and shops but not too many “tourist attractions” that you feel like you need to visit – so it’s nice to just walk around and explore on your own.

Here’s a map outlining some must-see sites as well as the location of hotels that will allow you to stay for free using just points:

We got off at the subway at the Moneda stop and headed towards the nearby Cerro Santa Lucia. This little hill (an easy 15 min. hike up to the top) is in the center of Santiago and provides fantastic views of the mountains that are so close to the city that they feel like they are closing in on you. This is the smaller of the two hills in the city (the other is a little ways outside of the center, Cerro San Cristobal), but provides excellent 360 degree views of the city with the added bonus of not being too hard to climb. The hill just springs up out of nowhere (the surrounding area is flat!) and I just couldn’t get enough of the snow-capped Andes off in the (nearby) distance. 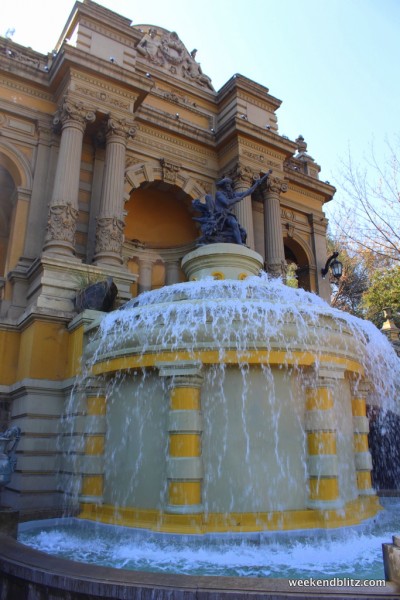 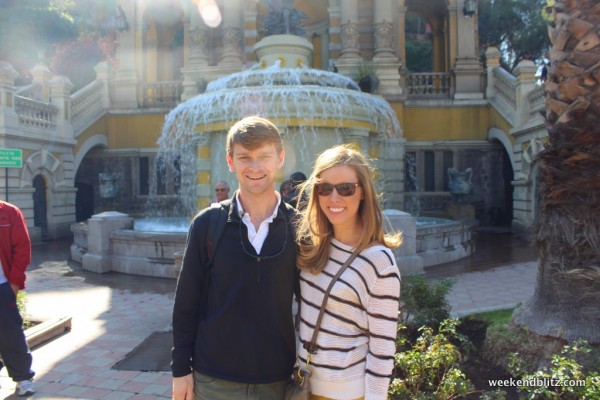 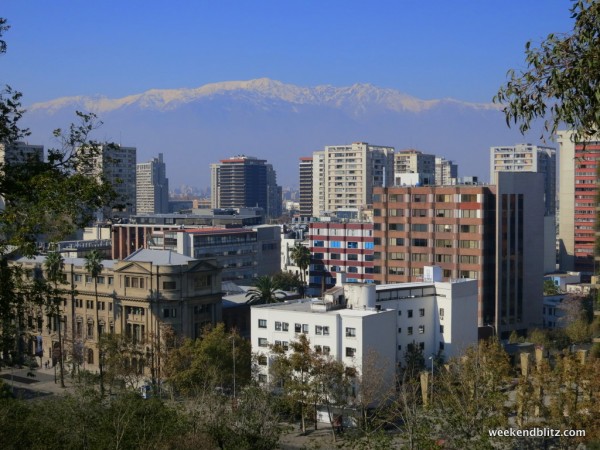 Can’t beat the views from the top of the hill 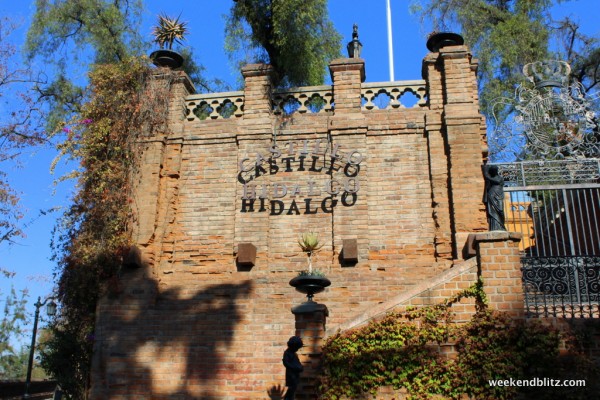 Castillo Hidalgo is on top of Cerro Santa Lucia, built in 1816 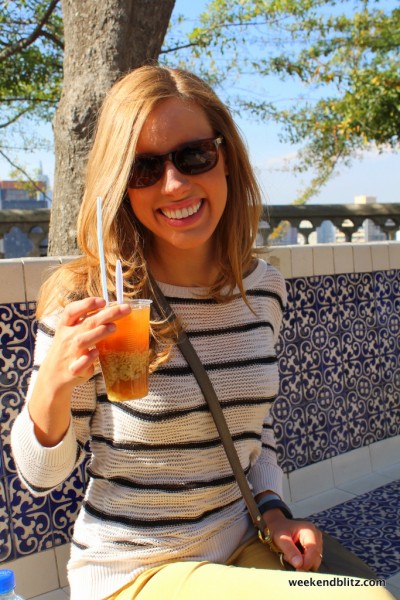 On our way down, we tried the Mote Con Huesillos

Although there’s not much to do along the way, there is a beautiful yellow fountain on the way up and an opportunity to try a decidedly Chilean drink: the Mote Con Huesillos (700 CLP). It’s a chilled peach nectar juice with cooked wheat kernels and a whole, sugar soaked peach. It was delicious and very, very sweet. At first, we thought it was apricot-flavored and were pretty skeptical — mixing odd juices with odd fruits and ever stranger grains and/or beans– we just weren’t sure about it. Once we dove in, it was super flavorful and quite filling given all the wheat kernels. 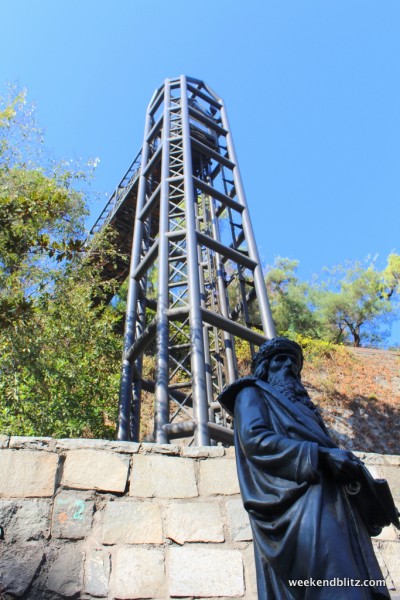 Feeling tired? There’s an elevator to ride down from the top of the hill.

From the Cerro Santa Lucia, we walked down Calle Mercedes to Lazarita Calle. We checked out a few of the cool restaurants and then made our way down the road to Boquena to hunt down La Fuente Alemeda.

This diner-style restaurant was packed elbow-to-elbow with limited actual seating. Seats lined the bar/counter area where you order from a waitress. 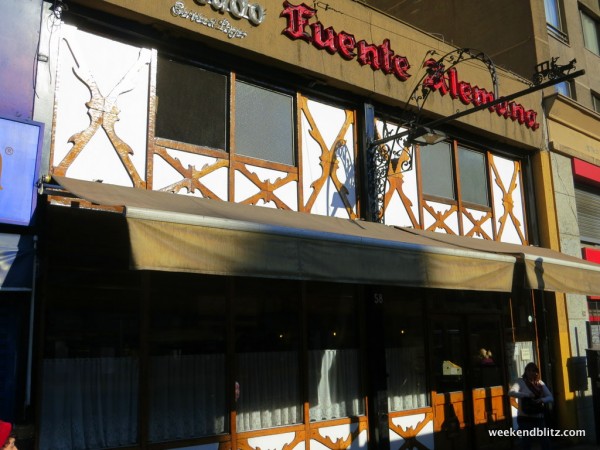 Headed into La Fuente Alemada for their popular lunch 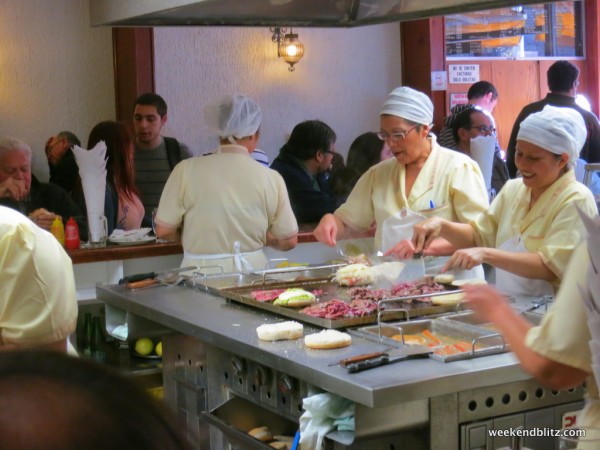 The kitchen at La Fuente Alemada is right in the middle of the restaurant. 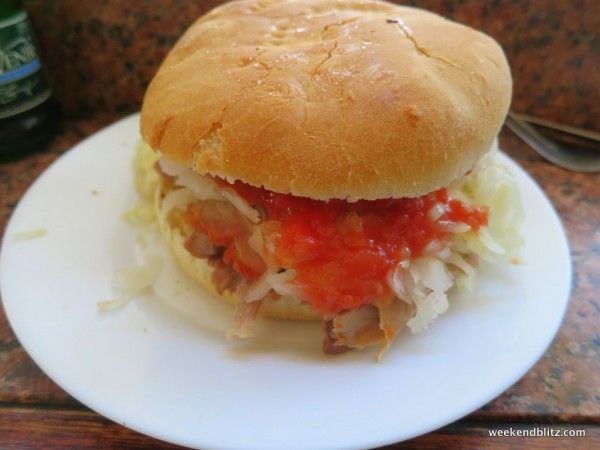 We went with the popular Lomito Completo, complete with mayo, sauerkraut and salsa (3,800 CLP). Our gigantic sandwich came out within 4-5 minutes, and we dove right in. It’s more like a meat sandwich with a giant mayo salad on top. Most of the locals had guacamole on theirs, making me immediately envious. Can’t deny the freshness at this place, though.

From the restaurant, we crossed the river down Pio Nono and found a sopaipilla salesman– a very enthusiastic one at that. Sopaipilla is a very traditional Chilean snack made of zapallo squash and dough, then grilled. This guy literally insisted that Jeffrey jumped behind the grill and man the helm. 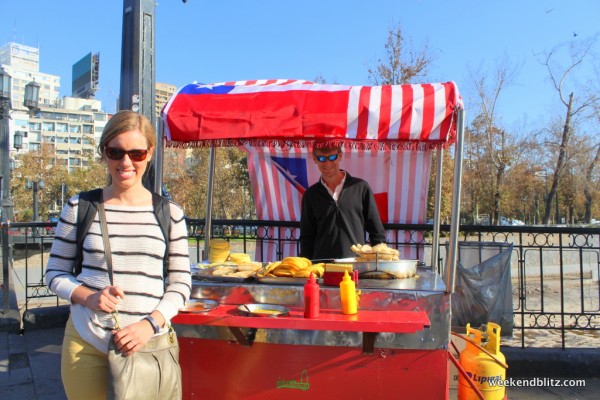 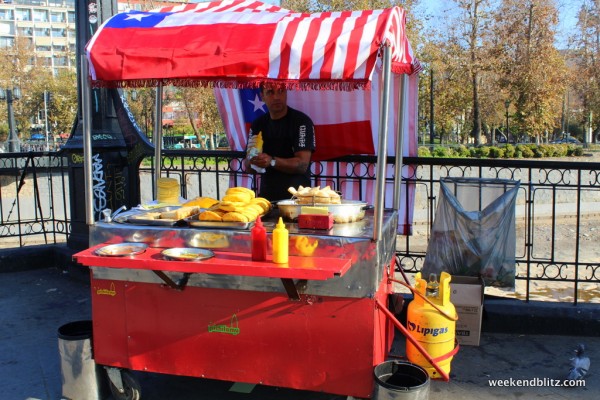 We then bought our (very overpriced?) sopaipilla. He threw on some salsa picante and other mustard-based sauce and we gave it a try — and it was tasty but tasted more like fried dough than squash. Maybe the squash is just minced in together with the dough? 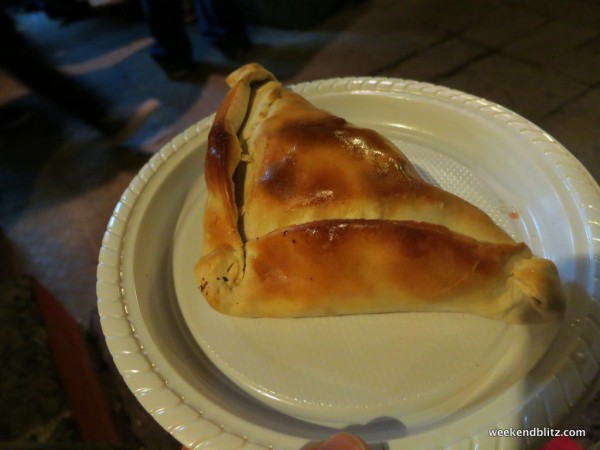 The sopaipillo, at long last…

Either way, the highlight was the zesty salesman more so than the actual snack. Interested in trying it at home? Here’s a recipe!

This literal hole-in-the-wall near the fish market is probably my biggest “must do” in Santiago. It’s a dive bar with tons of locals – in fact, we were the only tourists in the whole bar when we went. Jeffrey and I visited, and it was wall-to-wall with locals having a good time. 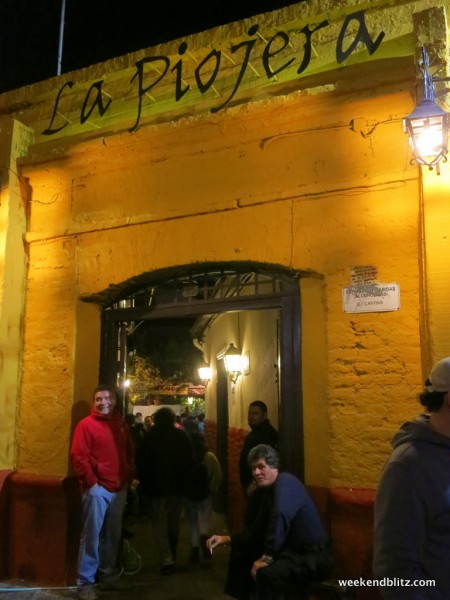 Told you… hole in the wall 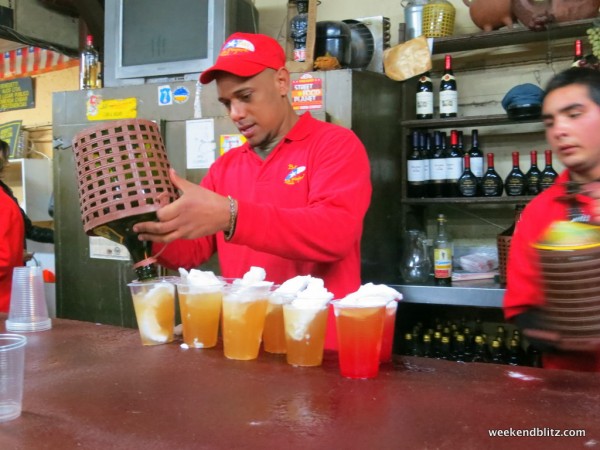 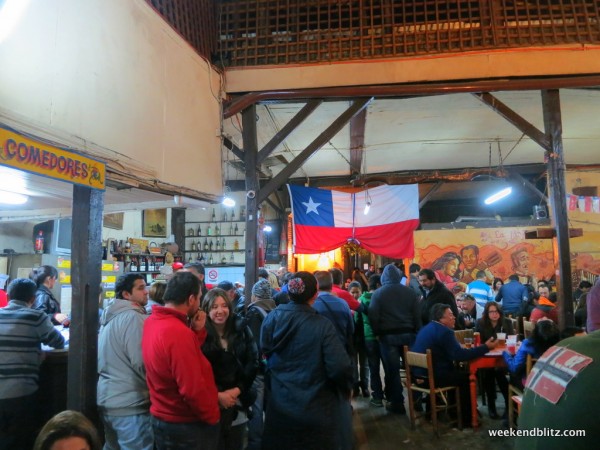 The rowdy crowd at La Piojera 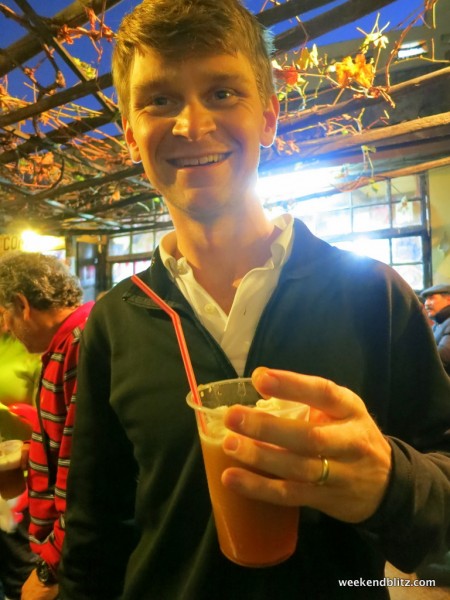 By the looks of it, Jeffrey’s pretty pleased with his first terremoto!

It was fun to be so intertwined with locals instead of tourists, and we ended up meeting a middle-aged couple who spoke great English and wanted to chat with us all night. I wouldn’t eat here but get a “Terremoto” which is Chile’s version of a Hurricane drink. Delicious …and dangerous. Terremotos are made with pipeño (a type of sweet, fermented white wine) topped with pineapple ice cream. Terremoto translates to “earthquake” and its said that the drink has this name because it makes your legs shaky once you drink it! If you’re brave enough, try a “Replica” (or “Aftershock”) next — it’s the same drink but only half the amount. 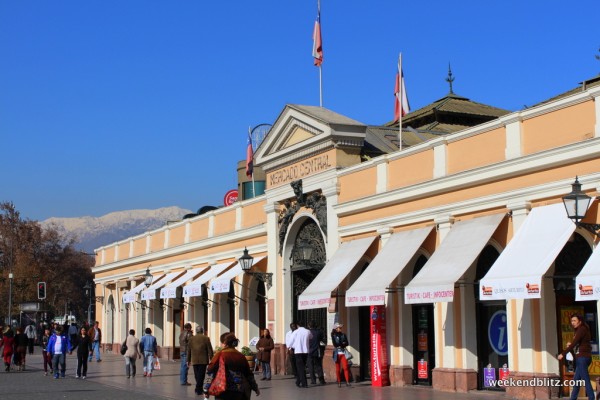 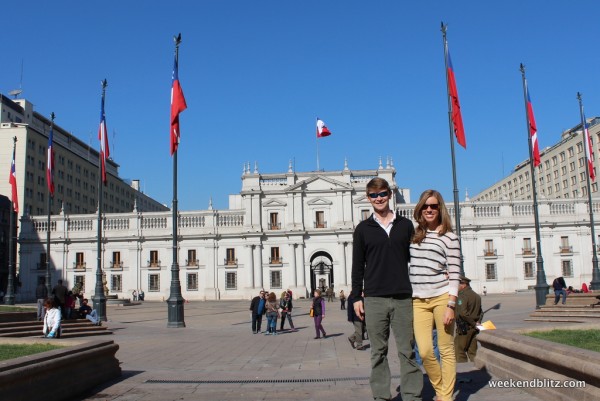 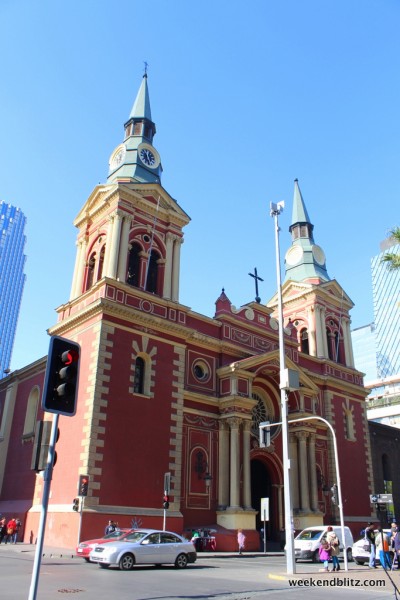 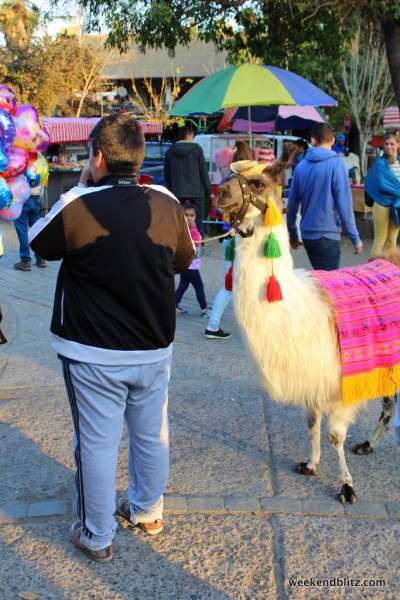 It’s not Chile if you don’t see a lama on the street!

Exploring Santiago is a nice respite from a city filled with hoards of tourists. Don’t forget to buy a “completo” – a burger or hot dog topped with avocados, tomatoes and tons of mayo). You can find these in any street stand, restaurant, etc. This street-side meal will really make you feel like you’re one of the locals. 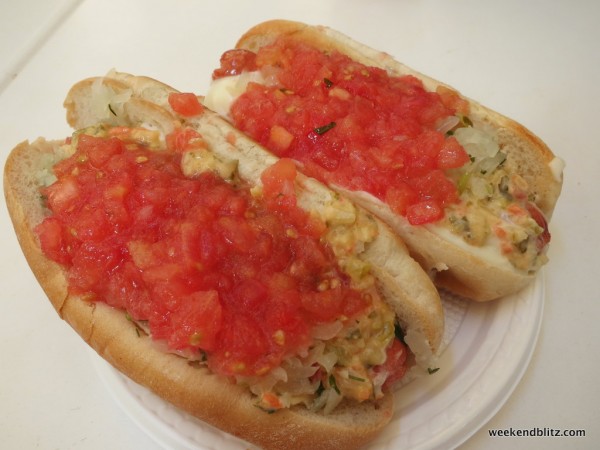 Once you’ve visited the hill and, of course, La Piojera, sit back and enjoy the laid back attitude of the locals!

Always our first stop in any city…? Coffee!

The kitchen at La Fuente Alemada is right in the middle of the restaurant.

Told you… hole in the wall

The rowdy crowd at La Piojera

Headed into La Fuente Alemada for their popular lunch

Castillo Hidalgo is on top of Cerro Santa Lucia, built in 1816

Feeling tired? There’s an elevator to ride down from the top of the hill.

It’s not Chile if you don’t see a lama on the street!