I needed to get from Washington-WAS to New York-NYP and had already decided I was taking the train. But, instead of a Northeast Regional train (which has appx 1 departure every hour), I wanted to try America’s one and only “high speed” train.

The Acela Express train isn’t cheap, especially when considering that it’s not so much of a “high-speed train” than an “Express Train”. The Acela will typically save you about 35 minutes when compared to the slower Northeast Regional train, but tickets can cost as much as 80% more (cheapest rates on the Acela are $152 vs $84 for the Northeast Regional–not sure that’s worth 35 minutes on the surface). Now, to be fair, that’s comparing apples to oranges because the cheapest seat on the Northeast Regional is coach and the cheapest on Acela is Business Class. But, if you’re sold on Business Class, Acela might only be $19 more ($186 vs $205)–a 10% premium for the faster service and enhanced train. First Class on Acela becomes downright expensive at around $268 – $375 for a one-way sample trip booked about 1 week out. 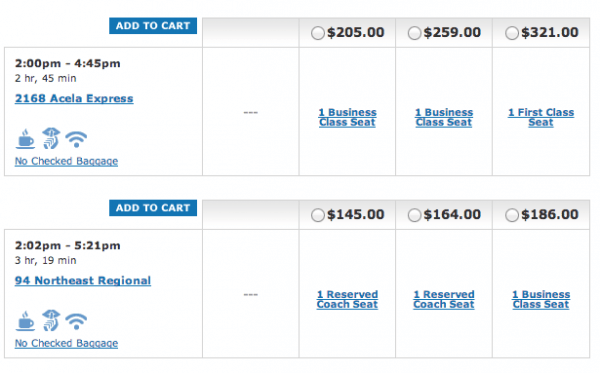 To save money, I purchased a Business Class seat on the Acela and used Amtrak points to upgrade to First Class. I’ll have more details on how this works in a future post, but you’re essentially able to upgrade for 2,000 Amtrak points each way (or you can transfer Chase Ultimate Rewards Points)–a fantastic use of points.

About the Acela Train

The cheaper and (slightly) slower route is the Northeast Regional train. A typical weekday sees appx 20 departures with travel time ranging from 3 hr 14 mins to 3 hr 40 mins. Generally, the trains depart once per hour at 2 mins past the hour, right behind the Acela. Prices for a coach seat booked about 1 week out are $84 – $145, depending on the time of day.

So how is it faster, really? A northbound Acela Express only serves 6 stops between Washington and New York: Baltimore, Wilmington, Philadelphia, Metropark, Newark and New York. A typical Northeast Regional train has 9-10 stops. This is essentially how they shave the 24 – 55 minutes that separate the 2 trains.

I made it to the station about 1.5 hours before the scheduled departure and had a few minutes to check out the ClubAcela Lounge at Union Station Washington, D.C. (link to review). 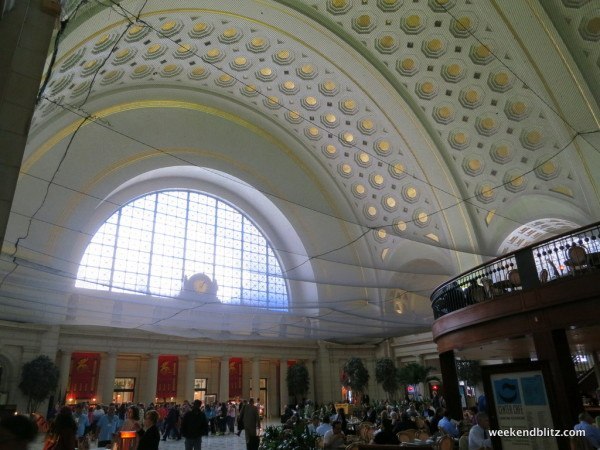 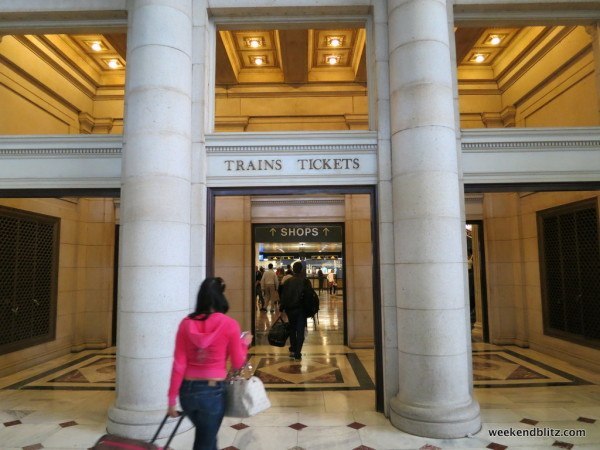 Promptly at 1:40pm, boarding for the 2pm train was announced. One of the (few) perks of the ClubAclea lounge is that there are doors that go directly to the tracks which, in theory, should allow you to beat the other passengers in the general waiting area to the best seats. 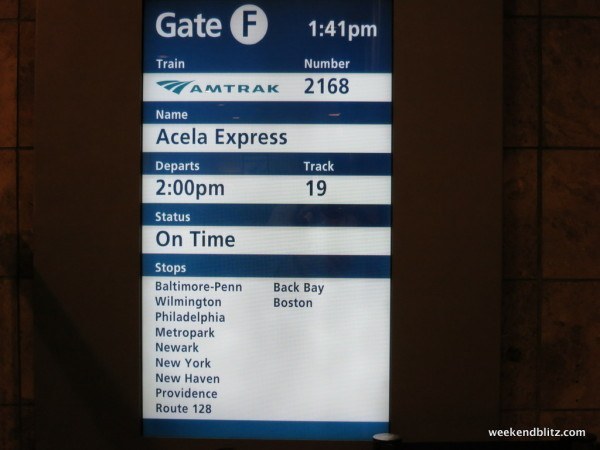 It was a decent little trek down the platform to the First Class Car which is at very end, near the locomotive. An attendant is standing at the door to make sure you’re at the right car. 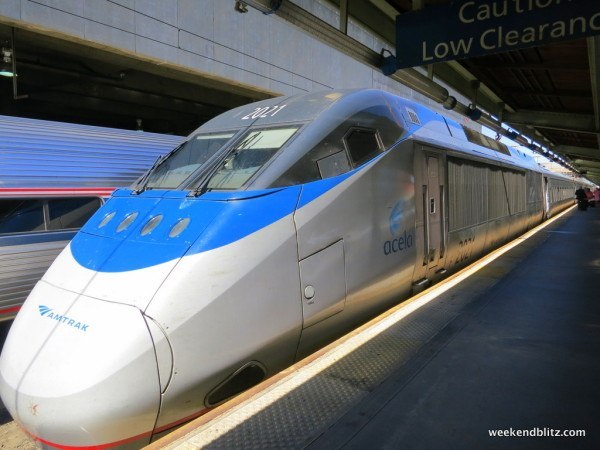 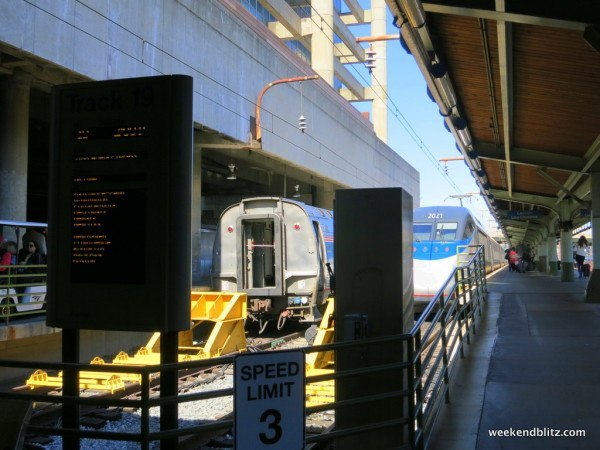 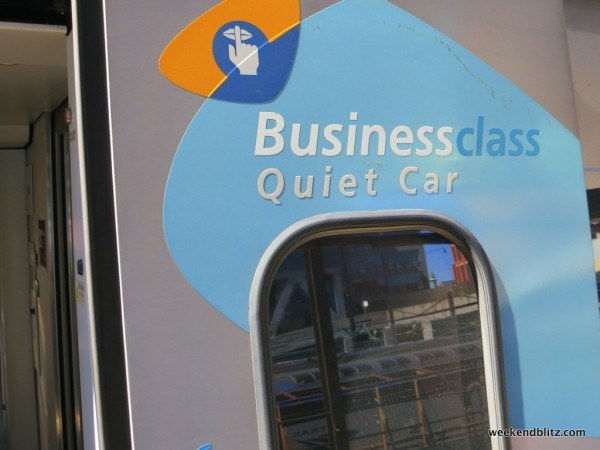 Most Amtrak trains in the Northeast Corridor offer a “Quiet Car” 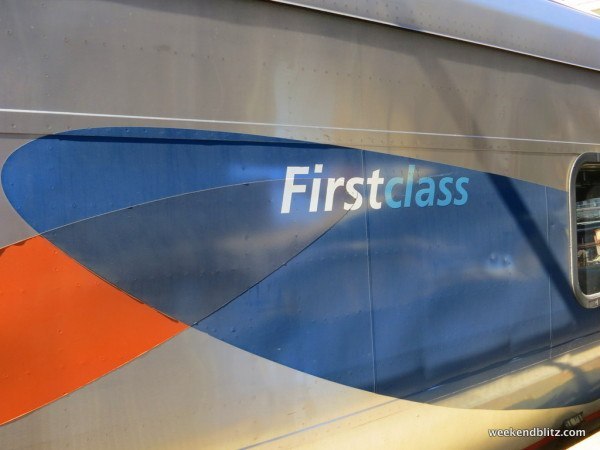 The good: The configuration of the First Class car was 2×1. A typical Amtrak train is 2×2 so the Acela had more space in the car per person.

The bad: Half of the seats are facing the other way, so you’ve got a good chance of having to sit opposite the direction of travel. For some that’s preferred though, I suppose. 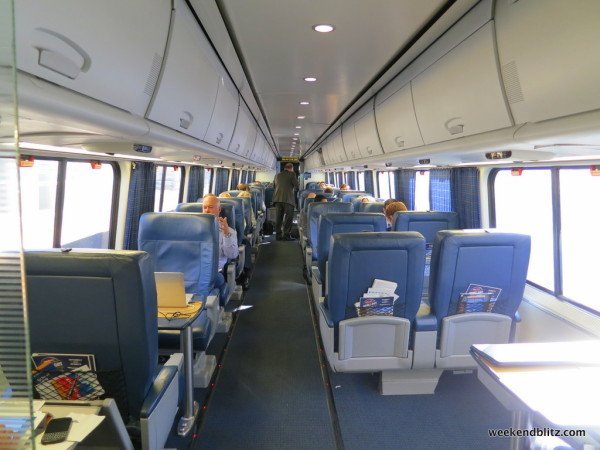 My initial thought was that the car seemed wider than traditional Amtrak cars. Not sure if that’s actually true…probably just my imagination?

In a first for me to see on an Amtrak train, there were large, airplane style overhead bins, enclosed with plenty of room for bags. 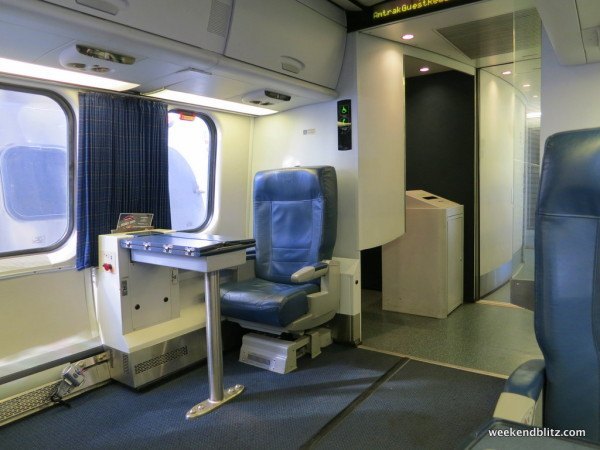 View from my seat, nothing but space on this train

It didn’t take me long to locate the most important feature of my ~3 hrs trip: the 2x power plugs at every seat. 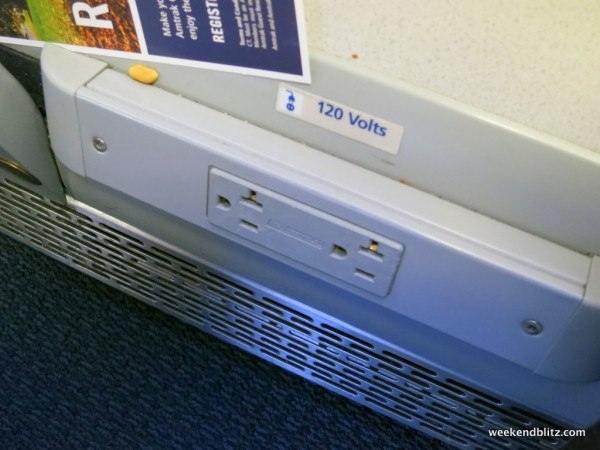 And, if pictures of train bathrooms are your thing, I’ve got you covered: 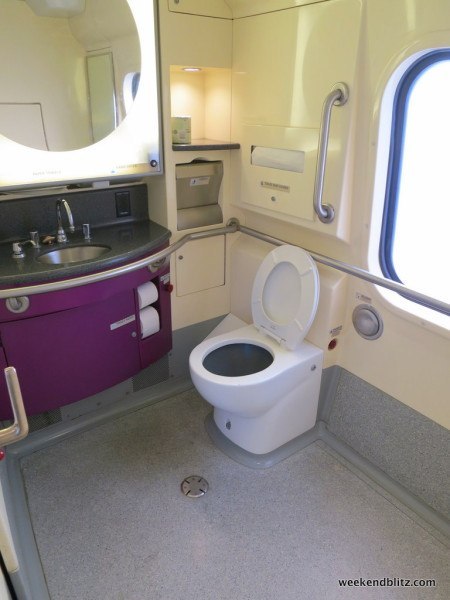 Within a few minutes of pulling out of the station, an announcement came across the PA that a few services would be offered: for those in Business Class, cafe service or cart service with light snacks coming through aisles and a full at-seat meal service for First Class.

One of the perks of riding in First Class is the at-seat meal service. In this day and age, this is rare for a relatively short trip. Most airline First Class cabins only serve a meal on flights greater than 3.5 hours long. And Amtrak takes their dining on Acela very seriously:

“At-Seat Meal: Exclusive to First Class Passengers. Our rotating at-seat menu service enables Acela Express First Class passengers to enjoy greater dining selections while traveling. A number of the entrees offered on the menu will be prepared using the sous vide method, which seals in taste and maintains the nutritional value of the food. Amtrak has been using this method very successfully since 1995 in the dining cars of its long distance trains.” Amtrak.com

Shortly after takeoff, err… departure, menus were distributed and the car attendant took orders. This was my first taste (pun intended) of the quality of the service that Amtrak offers and I was impressed. All of the spirits are top shelf: Knob Creek, Ketel One, Bombay Sapphire etc… And, any airline/train/airport that offers a quality beer like Dogfish Head 90 Minute IPA is pretty much perfect in my book: 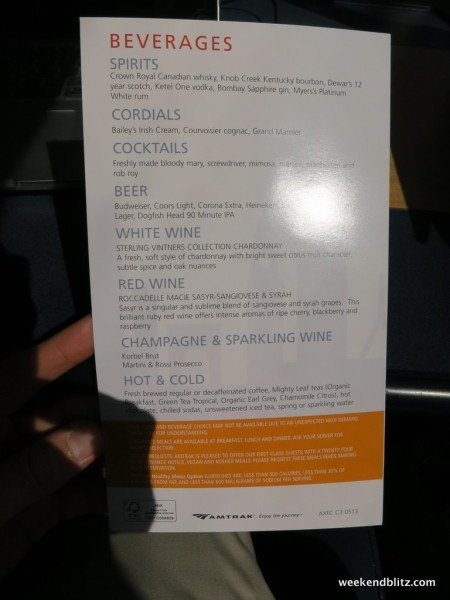 I ended up settling on one of the drinks in the cocktails section and discovered a drink that is very old but brand new to me and I love: Rob Roy. For those that are uninitiated, it’s basically a man’s version of a Manhattan or an Old Fashioned (sans the sugar). It is said to be created in 1894 by a bartender at the Waldorf Astoria New York:

The actual food menu sounded quite good too: 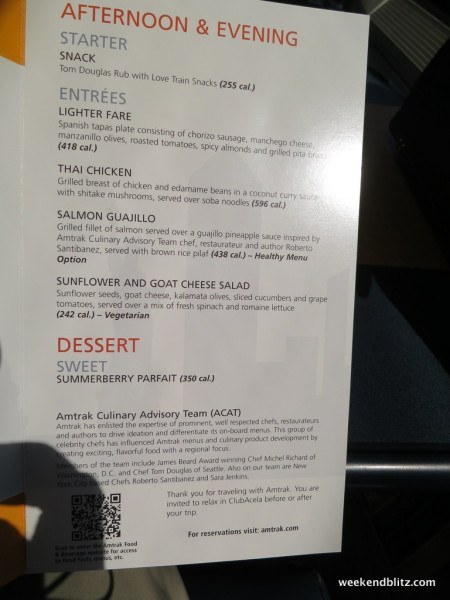 Within a few minutes of my order, I had my first course, a drink and the snack: “Tom Douglas Rub with Love Train Snacks.” It was basically a snack mix with sesame crackers, nuts, pretzels and some seasoned crackers, too. A rather small, appetizer-sized portion.

For the main course, I ordered the THAI CHICKEN: “Grilled breast of chicken and edamame beans in a coconut curry sauce with shiitake mushrooms, served over soba noodles.” It was quite good when compared to a traditional restaurant. In fact, it also knocks economy class airplane food out of the water. But, domestic airline First Class vs Amtrak Acela First Class? Again, Amtrak is the clear winner. The food was much better. The chicken was moist and the sauce was amply flavorful with a good coconut curry taste (although no spice). 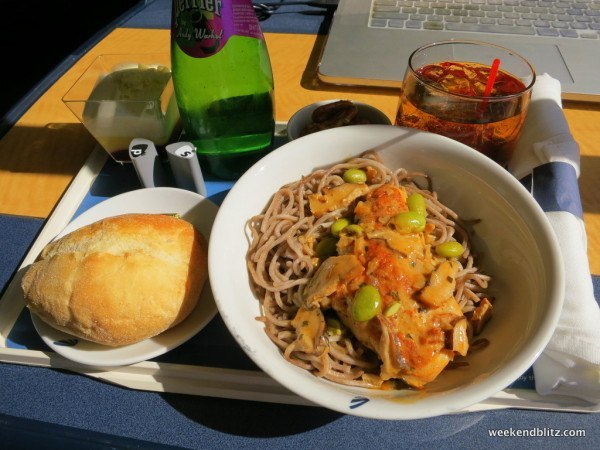 For dessert, they were serving a SUMMERBERRY PARFAIT: a good layered ice cream with raspberry. I might have downed every bite, so what?

The meal service was expeditious, which is just what you want when you’ve got a rather short trip. We departed Union Station right at  2pm, I ordered and had food by 2:20pm and was totally done by 2:45pm.

After the meal service, I gave myself a quick tour of the rest of the train: 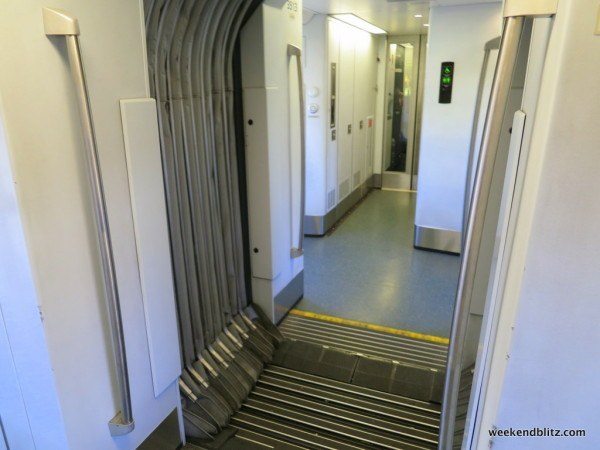 Unlike some Amtrak trains, the Acela has passenger friendly ways to pass between cars 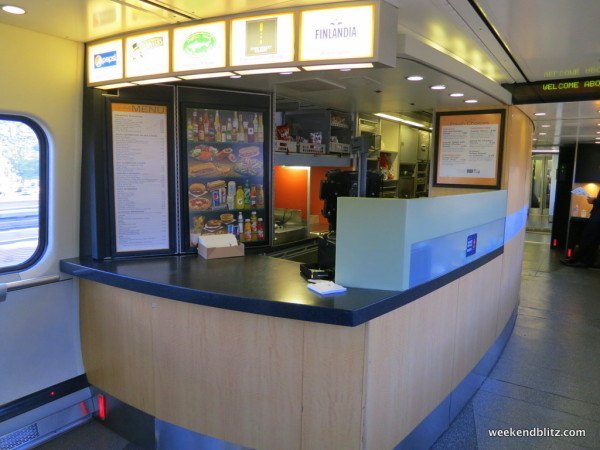 The cafe car/bar car, I caught it at an unusually empty time: this place was packed most of the trip

After a comfortable and relaxing trip, we arrived New York’s Penn Station appx 5 mins late–not bad at all! 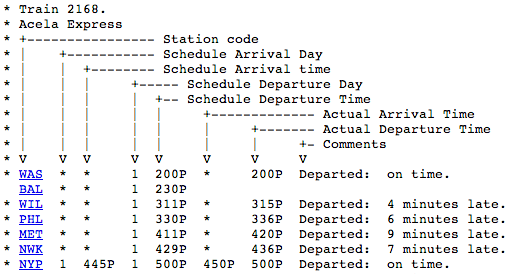 BOTTOM LINE: The Acela Express was a fun and worthwhile trip to experience. Is it worth it for frequent travel? Probably not:  you’re not saving that much time. But, I would consider buying a Business Class ticket and then upgrading to First Class for 2k points a great value and worth doing again. The Acela Express at-seat dining was delicious and was genuinely a far superior service than the airlines.