On our trip from Myanmar to Vietnam, we lucked into a 48-hour layover in Bangkok, one of our very, very favorite cities in the entire world. We first visited Bangkok in 2011 and it was our first foray into Asian culture. We loved it more than we ever thought we would and dove into Thai food and Thai culture head first – and haven’t looked back since. 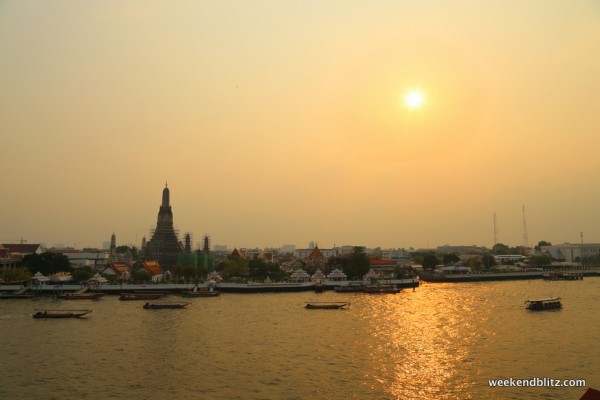 Can’t get much better than a Bangkok sunset

After visiting a few other Asian cities and countries by now, Bangkok is still at the top of our list and we think it’s a great city to get your feet wet- there’s plenty of tourists and enough English speakers that you won’t feel overwhelmed.

This was our second time actually staying in Bangkok for at least a night, so we were excited to finally get some more time in the city and grab some more of the street food that we’d been dreaming about for the past few years. 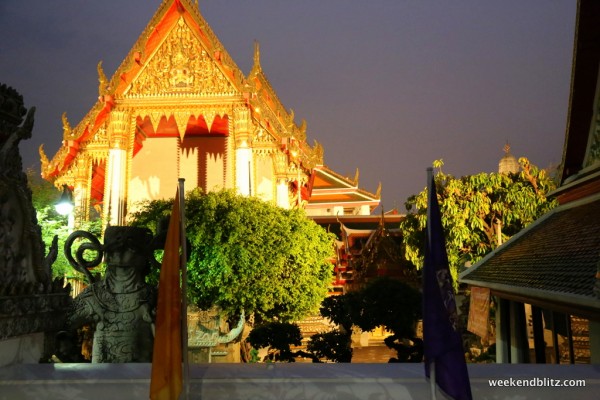 Bangkok is different from Yangon (Myanmar’s capital city) in that there’s MUCH more Western faces, people aren’t as innately friendly (probably because there are that many more Western faces, we’re not a shock value to them anymore) and, although things are still cluttered, it just seems like they have it more together and more organized… with clear walkways compared to things just laid out all over the sidewalk. Bangkok’s infrastructure is stronger and newer than Yangon’s, too – the sidewalks are in better shape (rusted railings and huge,deep holes in sidewalks in Yangon) and Bangkok has actual bus stops and a nice sky rail. But, there’s not as much culture on the streets in Bangkok as far as clothing goes: everyone is wearing Western clothes, T-shirts, jeans (not longyis) and there’s LOTS of short shorts, dresses etc. Skin is in.

Here’s our itinerary for our 48 hours. Granted, we’d already seen most of the highlights on our first trip, so we looked at this time as a way to check out areas we hadn’t explored yet and to hit our top favorites from the last time, too.

We landed at Suvarnabhumi Airport and took the Makkasan Airport Rail Link from the airport to the Makkasan stop, then took another train to the Nana Nua station, which is a 5-minute walk to the hotel – the Aloft Bangkok Sukhumvit 11. We’d stayed at the Aloft Bangkok in 2011 when it had just opened and we were eager to stay there again to see how the booming area had changed in the past couple of years. Turns out, the area had changed a lot and there were much more hotels and restaurants than we remembered – we hardly recognized it. The Soi 11 street is very upscale with lots of ethnic food options (including an Australian bar and German, Mexican, Japanese and Indian restaurants). Actually, it was quite hard to find some Thai food on the street, to the point that we returned to our room to order green curry room service. Lolz.

We woke up refreshed and ready to hit the town. We took the train a few stops up to Siam Paragon and explored the huge shopping center filled with luxury shops. We’d just been in Myanmar for a few weeks, where the luxury shops haven’t yet arrived, so it was fun to walk through the fancy mall that had air conditioning for a little while. Maybe a lot has changed in 3 years or maybe our few weeks’ stint in Myanmar had us price shocked, but everything at the mall is surprisingly upscale and surprisingly expensive. Still, it was so refreshing to see Western brands – we found the Neutrogena sunscreen we were looking for, Gatorade, Vitamin Water and even Cetaphil face wash (for $30 U.S.).

From there, we walked in the area a while before catching a cab to Wat Pho, one of the largest temples in Bangkok and known for its huge “Reclining Buddha.” We’d visited Wat Pho before but the golden temples are part of Bangkok’s charm and we wanted to explore it after spending the past few weeks exploring Myanmar’s own golden Buddha temples. Wat Pho is also one of Bangkok’s oldest temples, built around 1700 – before Bangkok was the capital of Thailand. There are more than 1,000 images of Buddha in the temple and it’s definitely a must-see on any trip to Bangkok. The highlight of Wat Pho to me is the Reclining Buddha – it’s hard to even take a picture of it since it’s just so large. 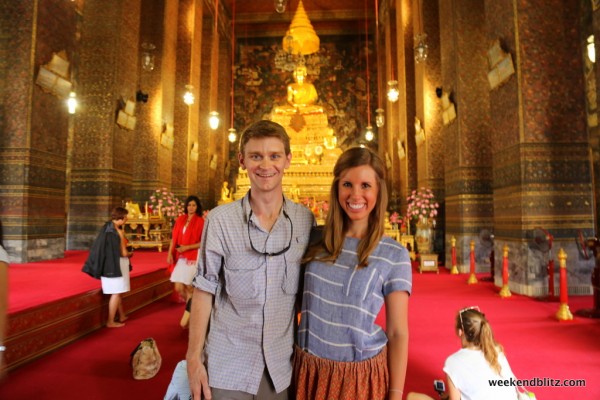 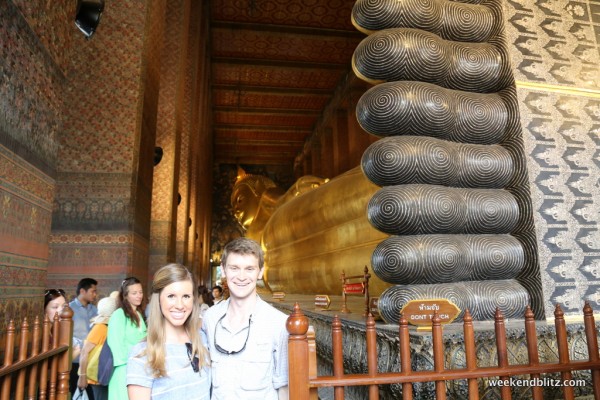 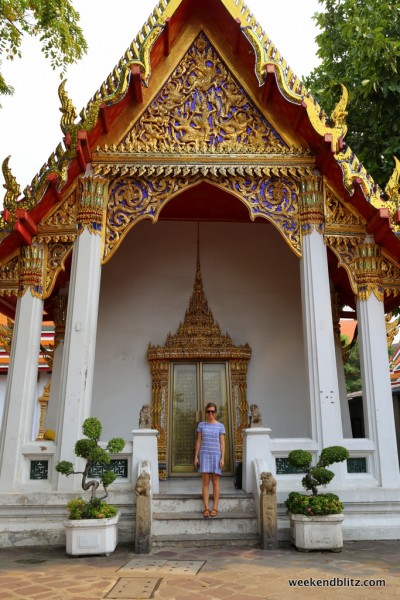 From Wat Pho, we headed around the corner to a lunch stop where we split a few bites to eat before continuing on to a rooftop restaurant/bar that we’d been wanting to check out.

Eagle Nest is only about a 5-minute walk from Wat Pho, so we headed that way and were early enough in the afternoon to get a prime spot right on top. The rooftop is right above the Chao Phraya River and just across the river is another one of Bangkok’s famous temples, Wat Arun. (Wat Arun is one of my favorite temples because you can climb it, but we didn’t get a chance to re-visit it on this trip, just able to take in its beauty from across the river.) This rooftop bar is probably my new favorite place in Bangkok so I’d highly recommend checking it out and catching the sunset there – it is located on the top floor of the Sala Arun Hotel – just enter through the lobby and take the wooden staircase up to the top. 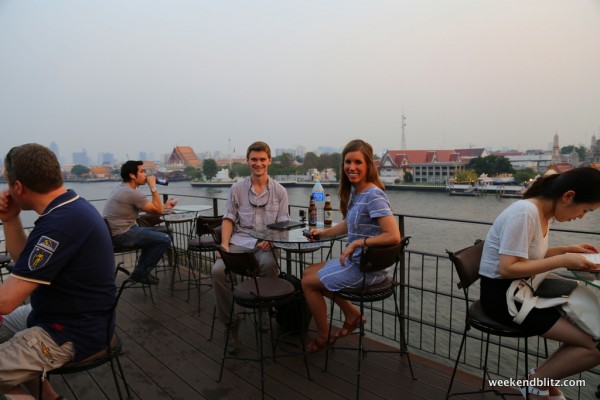 Enjoying the evening at Eagle Nest 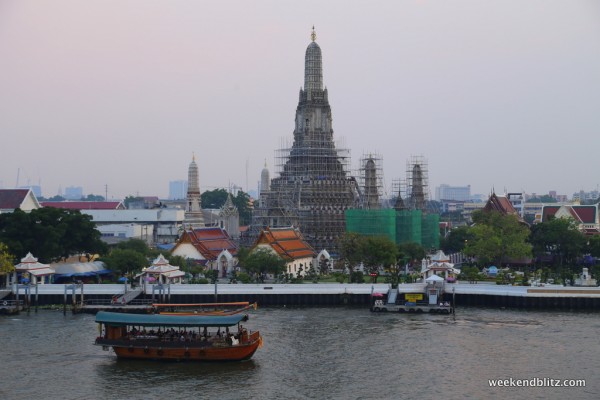 The views of Wat Arun from Eagle Nest’s rooftop deck 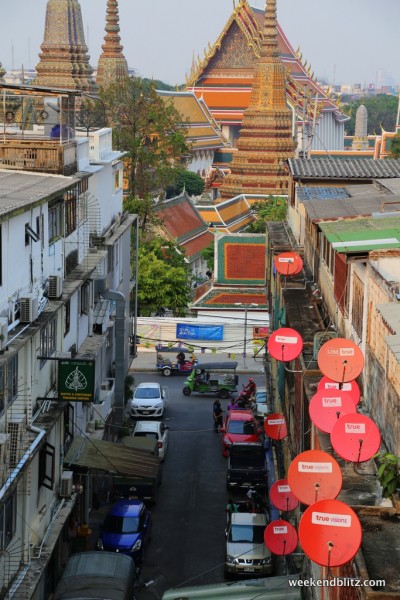 Of course, no visit to Bangkok is complete without a walk down Soi Cowboy, one of the most famous streets in town thanks to its “colorful” storefronts made even more famous in The Hangover 2. It’s not some place I’m interested in hanging around all night, but it is fun to people watch as you walk down the street (and make a game out of guessing how many of the women dancing in bikinis are really, actually men). It did seem like security had been more enforced all over the city, with lots of security on the train stations, etc., so we weren’t too surprised to see that Soi Cowboy now had barricades on each end, making it look much more like a Beale Street in Memphis than anything. 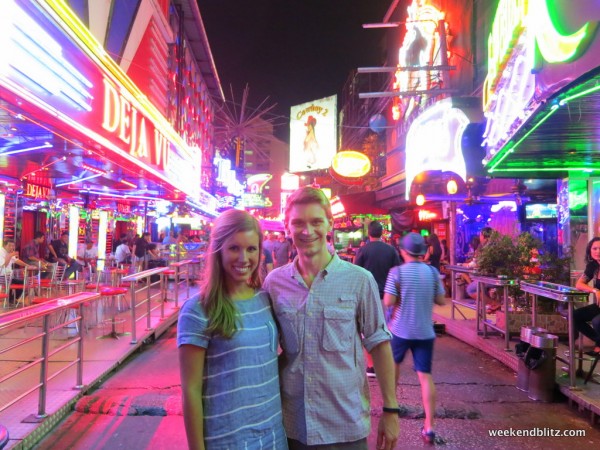 Being tourists on Soi Cowboy

We’d worked up an appetite after walking down Soi Cowboy, so we slowly made our way back to the hotel and stopped at each of the street food stalls along the way to sample all the delicious offerings, from pad thai (35 THB) to spicy chicken with steamed rice (100 THB) and more. 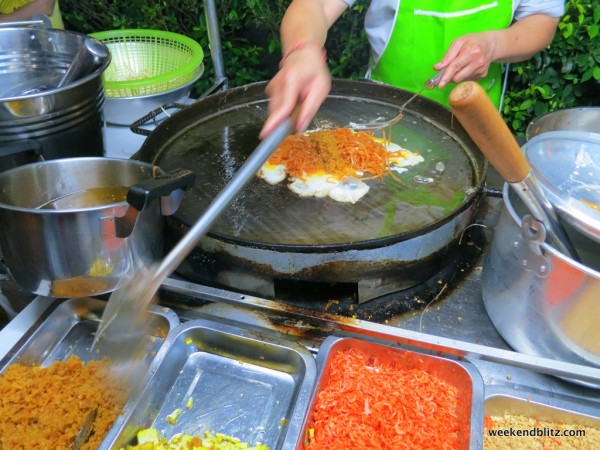 On our last day, we explored a little more around our hotel’s area to see more of the changes that were taking place in this growing part of town.

We ended up eating lunch at Thai Chili Culture, a restaurant just around the block from the Aloft Bangkok, and having our final red curry and som tom salad of the trip. It was, as expected, all very good, but it’s proof that Bangkok can be surprisingly expensive. Total for the salad appetizer and one curry entree was appx ~$20 USD. Not as cheap as we’d remembered! 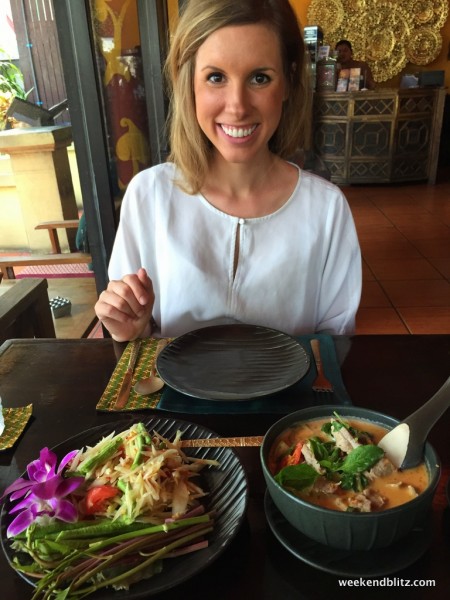 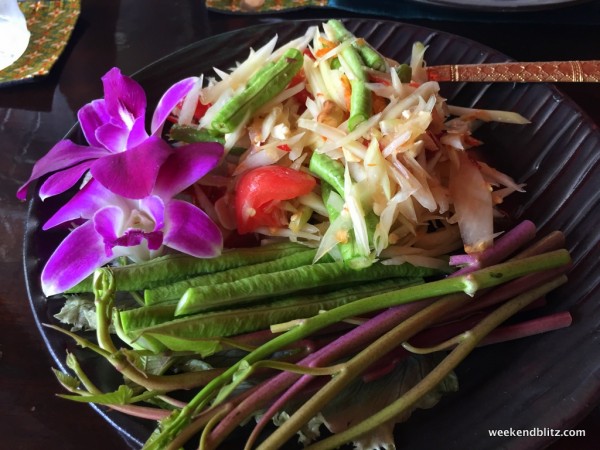 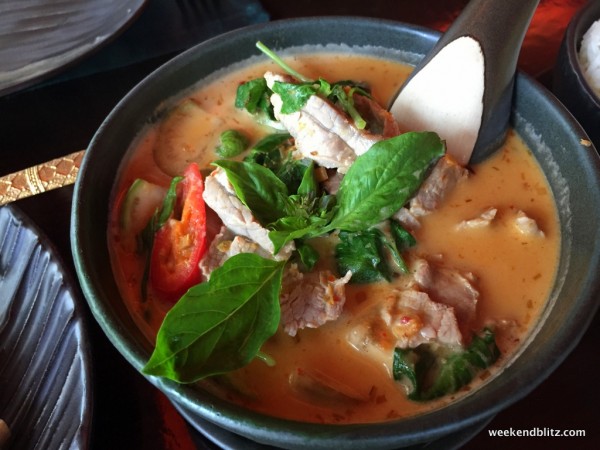 One last red curry before we left…

One last red curry before we left…

Being tourists on Soi Cowboy

Inside the ubosot of Wat Pho

Can’t get much better than a Bangkok sunset

Enjoying the evening at Eagle Nest

The views of Wat Arun from Eagle Nest’s rooftop deck

Top 8 Things to Do in Bangkok
Previous